Today starts the latest Writing Event over on Goodreads. The M/M Romance group has created events in which members think up a storyline to go to a picture they see. Authors choose a prompt that interests them and writes the story for that reader. After the stories are turned in, over a period of time the stories are put up in the group for everyone to read.
There have been two previous events, I think. Last summer, Hot Summer Days and the winter before, Stuff My Stocking. Both events stories have been published free in anthologies. You can find them on AllRomanceEbooks or on Goodreads.

I’m am excited to say that this summer I participated in the event. LIaW has started and each day two new stories will be put up in the group for the members. If you are not a member, join! It’s a lot of fun and those guys are great! 🙂
My short story, Magick’s Cucumber, is one of the first stories to go up. Three stories were put up earlier today and Magick’s Cucumber was one of them.
To read it, Join the group and then go here.

Or if you don’t have a goodreads account(which is free) or you simply do not wish to join the group, I will be putting the story up May 23rd.
I would put it up sooner but I have the rest of From Love and Pain’s tour, Michael Meyer’s blog tour and then the Hop Against Homophobia blog hop to do. May 23rd is the earliest I can post it.

Just a lil’ something to look at…
Yummy, ain’t he?

Okay! Now time to get down to business. Unfortunately I haven’t posted anything in over a week. How careless of me!

I’ve got a few updates on my writing…

1. I’ve decided on a title for Tim and Danny’s story. “Letting Go” will be the first in a series of what is going to be three books. I may write more, but as of right now, this is what I have planned out.

2. I’ve started on the Picture Inspired Short that I mentioned on the 3rd. If you missed that posting, you can find it here.
I’ve also managed to get the picture I talk about in that post up. This it is it:

Nice, right? I just hope I can do it justice 😀

3. So today I woked up at 3am and could not for the life of me fall back to sleep. At six I was still up and my alarm is set for 7:55am so I just gave up on falling back to sleep. As I was laying there, a plot jumped into my head. Having nothing else to do, I started writing it.
The title is “Second Time Around“. This is going to be a fairly easy-to-write story. It will be a short and the MC will have a lot of similarities to me *coughs* hair color, attitude *coughs*
I didn’t do this on purpose, it’s just how it came out. I’m having absolute fun writing this as it’s unlike anything I’ve written before.

Jamie,the MC1, lives with his straight modeling best friend of three years, John. He’s finally achieved his life long dream of opening up his own bakery (again, a yet unfulfilled dream of mines), and John throws him a party. There he meets a guy, Matthew (MC2), who co-owns the Home Improvement shop across the street from his bakery. They hit it off, of course.
Only there’s one problem. Matthew is possibly straight and theres a 90% chance that he thinks Jamie is a woman!
Oh, that’s right. I forgot to mention Jamie loves wearing women clothing, has long pink hair, manicured nails, waxed legs and enjoys his eyeliner.
Heres a peek at what I’ve written so far:
Excerpt
“Who was that guy I saw you speaking to towards the end?” John’s voice was casual but the quick glances out of the corner of his eyes were anything but.
Resisting the urge to laugh, Jamie looked back out the passenger side window.
“Matthew. Him and his brother run the Home Improvement store across the street. Didn’t you invite him?”
“Must have met the brother. Sooo… does he know you’re a guy?”
Jamie couldn’t have stopped himself that time, even if he had tried. He burst out laughing, slapping his palm repeatedly against his naked thigh.
He knew John was serious and the question really was a legit one. But he couldn’t help it.
“Stop laughing.” John muttered, trying not to chuckle himself as Jamie continued to laugh, a tear squeezing out the corner of his eye.
Trying to breath deeply and get himself under control, Jamie giggled. “Sorry, sorry.” he apologised when he could open his mouth without laughing.
John shook his head, the corner of his mouth tilting up in a small smile.
“So does he?”
Opening his mouth, he stopped himself before he could respond “Of course he knows I’m a guy.” He glanced down at himself in the seat. He looked more feminine tonight than he usually did. His legs were unblemished and shiny from his recent wax and the oil on his skin and his feet looked smaller than they usually did in the all black Vans. His nails were painted pink, not to forget his hair was as well. And he knew from looking in the mirror before they had left home that the eyeliner made his eyes seem brighter. Tonight, more than ever, he could be mistaken for a tall, flat chested girl.
He bit his lip. The more he thought about it, the more he was certain Matthew had no idea he was a guy.
Which meant the man was straight. And he’d only flirted with Jamie because he’d thought he was a girl.
Crap!
He heard a sigh beside him. “He doesn’t know, does he?”
Jamie shook his head in the negative. “I don’t think so.”
“Did you like him?”
“He was really nice.”
“And you’re sure he doesn’t know?”
“You didn’t, and I was wearing jeans.”
“Crap.”
Slumping down in his seat and crossing his arms over his chest, Jamie let his head thump against the window pane, deciding that was exactly what he felt like.

What do you guys think? Does it have potential? This will be a free read available on Smashwords and Goodreads once I have the cover designed.

Oh, and in case any of you were wondering. This is the shade(s) of pink Jamies’ hair is: 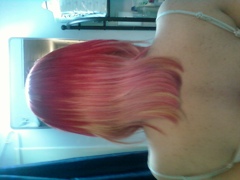 That’s actually a picture of my hair in January.

Saw this over at Cryselles Bookshelf and got super inspired by it. It’s one of her 1000-word-Thursdays pictures and I decided to write a short story based on it. Mind you, its not going to be a 1000 words but I’m hoping to keep it under 15k words. I’ve talked briefly with Cryselle and she mentioned another author who did chapter a week postings on her blog with a picture-inspired story. I have to email her, but I’m hoping to do that with this story as well since I will later be putting it up on Smashwords as a free read. After, it wouldn’t be being written if not for her posting such a wonderful image. 🙂